I’ve been working a theme called Live Wire and it’s now ready to public. This theme rolemodels are My Life and Prototype. I can’t thank Justin Tadlock and Theme Hybrid community enough, because I have learnt most of WP stuff from there. So I thank them all like in the Oscars:) Theme is build on fantastic Hybrid Core.

I have build this theme with Mobile first attitude. All browsers get one column layout first and at certain point (768px) layout gets two column layout using media queries. Other breakpoints are 1024px, 1224px and 1524px. Yes, I know I should be using ems also in breakpoints. It was just a desicion I had to make with my layout. Maybe next time. Almost all the others width/height are in ems though.

I started desing the layout with Grids like 1140px CSS Grid but at some point I realized that ready to go grids were more in the way than helpful. And browsers calculates and rounds percentage values differently so I decided to make simplest Grid ever just using integers.

Responsive navigation is one of the most difficult tasks in responsive design. I decided to use Tiny Nav although I know it has some disadvantages. I didn’t want to display horizontal menu in small devices and Viljami Salminen, who have created Tiny Nav, is also finnish like me. With my next theme I might try something different. And hey, if you don’t like Tiny Nav, you can always disable it.

Theme has been tested with several browsers and atleast with iPhone4, Samsung S II, Nokia Lumia 800 and iPad II. Biggest problems are IE7/8, because they don’t understand Media queries. First I used CSS3 Media Queries for legacy browsers, but it was rendering very slow. So I changed to Respond.js which is a lot more faster. I don’t have any data for you, but you can definitely see the difference.

I have three goals with this theme. First this is my graduate work and I hope I’ll pass. I’ve been studying while working as an adult student for free. We have great education system in Finlad. Second I’m trying to get this theme in wordpress.org and maybe finally in themehybrid. 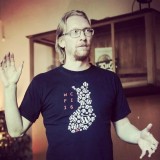 Thanks for this theme and making it free.I am currently using this on my website.While customizing I noted below code..is there any special reason of enqueue two scripts for fitvids and tinynav

No, there is no special reason. This was my first public theme so it’s not the best of me:)

Hello! Thank you so much for releasing this theme. I’m using it for my blog currently, and it works beautifully! But I’d like to know how to remove the featured image (i think that’s what it is) from the title? Any advise would be very much appreciated 🙂

Shoot any questions in support forums.